Things to know about car sharing & which providers enable eCarsharing

Things to know about car sharing & which providers enable eCarsharing

Car sharing is booming. By the beginning of 2021, over 2.9 million users in Germany had already registered with a wide variety of providers. This is an increase of 25 percent compared to the previous year. It is not without reason that car sharing is becoming increasingly popular: anyone who shares a car saves money, is flexible and moves in a more environmentally friendly way.

A plus point is the relief of the cities. Many private vehicles remain unused for several days at a time between trips. According to statistics, it would only take about a tenth of the cars currently available if all city dwellers switched to car sharing. Areas that are currently used as parking spaces could then be converted into green areas or living space, for example. Also, the need for resources will decrease.
For most drivers, car sharing in the city is not only cheaper than owning a car, but also creates space and protects the environment by not having their own vehicle. However, if you want to protect the environment holistically, you can use an electric car to completely eliminate CO2 emissions.
There are now many different car sharing providers with different sharing models. The selection of providers also differs greatly from region to region. Nevertheless, there are some big brands that are represented throughout Germany.

A distinction is made between station-based car sharing and so-called free floating.

With the station-bound model, the cars always have to be picked up at a fixed location and brought back there again. This version has been around for many years – the classic rental car. The vehicles are usually only rented out for periods of one day or more.
The fact that car sharing has become more popular in recent years is due to the station-free models, known as free floating. Cars can be parked anywhere within a certain business area. The vehicles can often be used here for short periods of time or for individual journeys. The tariffs and price models vary depending on the provider.

Tip: the entrance fee can often be saved through various special offers by the companies.

The best-known providers that have established themselves in major German cities are Sixt and Sharenow (a merger of Car2go and DriveNow). In addition, many other service providers, some of whom rely entirely on electric rental cars, compete on the market. Here is an overview of some providers: 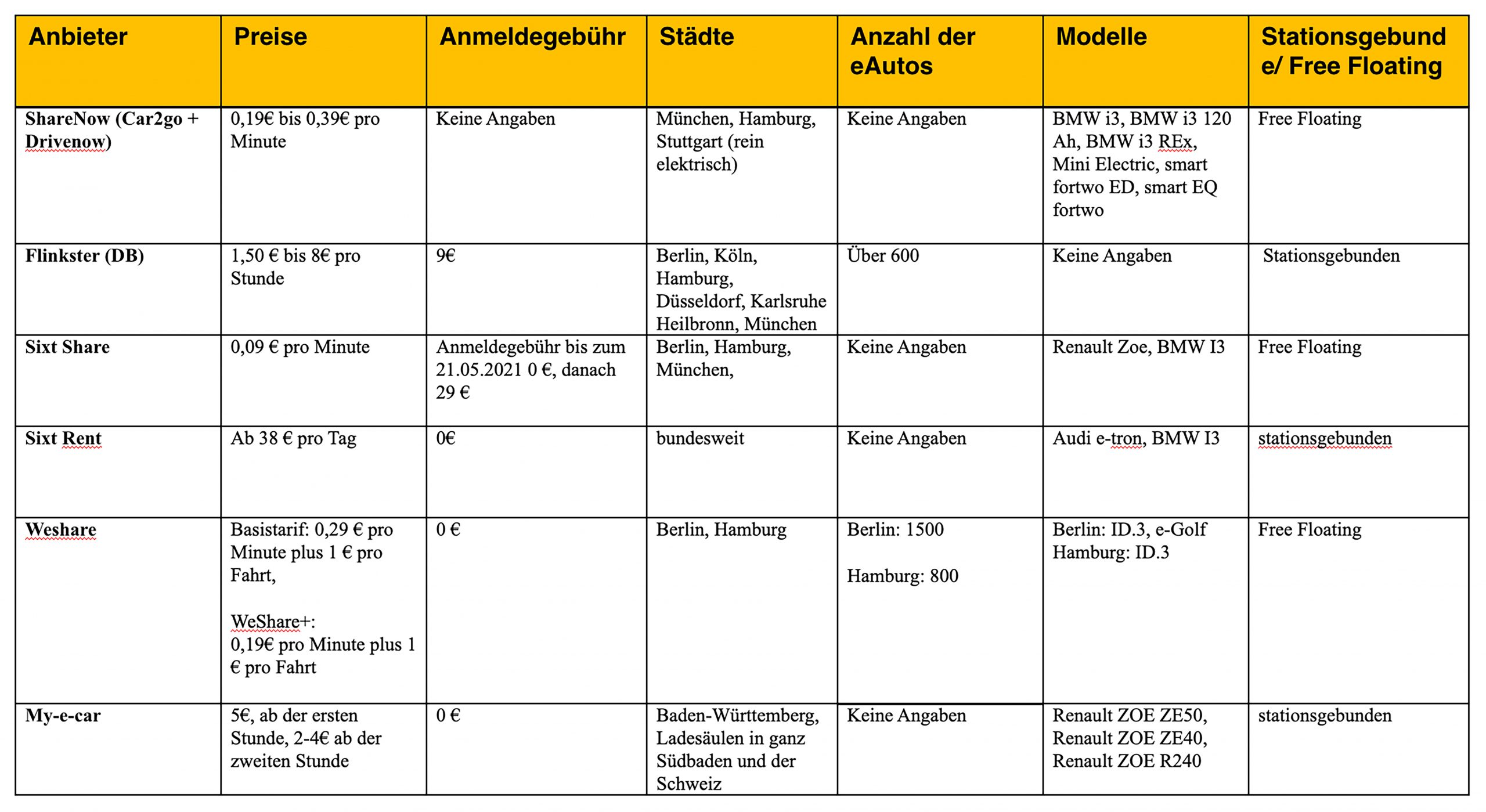 In summary, it can be said that the choice of provider depends on one’s own user behavior and individual situation. For day tours, station-bound providers are usually worthwhile. With a short shopping trip, it is again cheaper to choose a free floating electric car.